This release focuses on improving strategy execution. Strategy execution can now be monitored and visualized with different approaches and the organization structure has been embedded more strongly into the strategy work.

The main updates are listed below.

Previously separated sections of Strategy-module are now combined, while preserving their current functions. Strategy execution can now be monitored from the following angles:

In addition, the navigation has been improved which allows easier transition between the available views. Breakthroughs and actions are also now opened as a sidepanel, so that users don't have to leave the current function to open them for closer inspection or editing.

Users can now also save strategy views for their own or organization's use. Facilitators can use this functionality to create easily available and standardized views of the different strategies. Views are selected and saved from the strategy level-selection.

Two existing functionalities in Strategy have also moved to a new location. Business Simulator can now be found as part of Scoreboards and Workshops have now moved to Agenda 360. Their functionalities have not been changed in this release.

In addition to improved navigation, Strategy-module has received new functionalities and some of the existing functionalities have been improved. The most notable changes are listed below:

The settings and positioning of the strategy map were improved, so that more room was left for the actual map. Strategy map also received new functionalities:

Board view is a brand new perspective on activities. The strategic goals form the columns of the board and each breakthrough is added as a separate card under the goals showing their current success. Additional information can toggled visible from the upper right corner, e.g. actions, linked metrics and descriptions.

Other improvements and changes

Users can now define in the strategy's settings whether they want to use the separate publishing process: 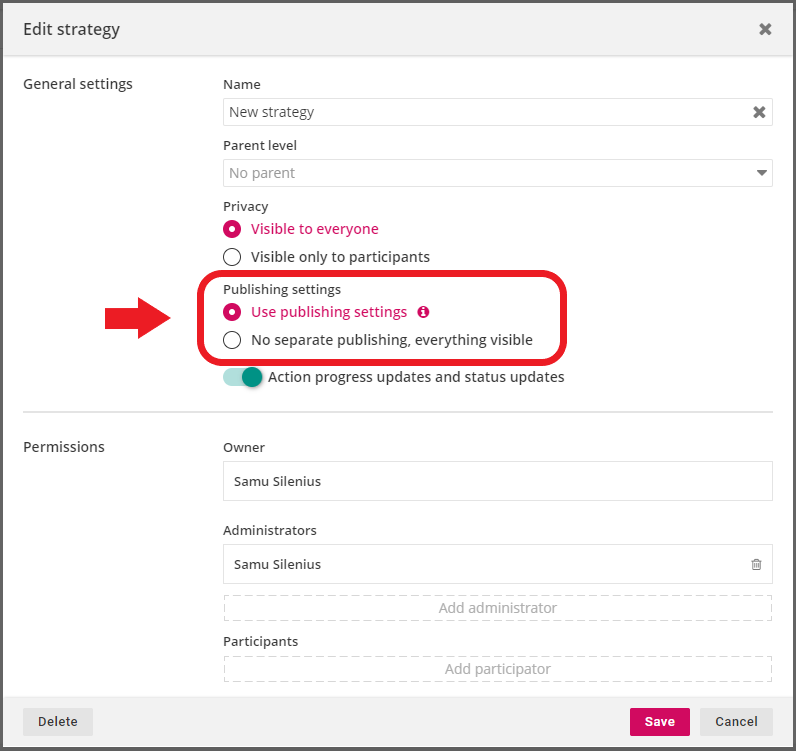 Meetings now also support visual text formatting. Headings, italic and other settings can be activated by selecting them from the toolbar that appears in the text box:

Graphs can now also be embedded in the meetings, so that they are constantly visible. Users can select to capture a screenshot of an embedded graph which will also be added to the generated memo:

Was this article helpful?
Thank you for your feedback! Our team will get back to you
How can we improve this article?
Your feedback
Comment
Comment (Optional)
Character limit : 500
Please enter your comment
Email (Optional)
Email